About Richard A. Koenigsberg 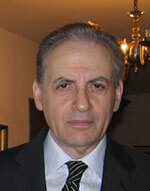 Richard Koenigsberg received his Ph.D. in Social Psychology from the Graduate Faculty of the New School for Social Research and formerly taught at the New School. For the past 40 years, Dr. Koenigsberg has been writing and lecturing on the psychological sources of war and genocide. He is the author of four books, numerous papers and articles, and has lectured extensively throughout the United States.

His first book, Hitler’s Ideology (1975), was the first to study political rhetoric from the perspective of embodied metaphor. Hailed as an “instant classic” it revealed the biological fantasy that lay at the heart of Nazism and the Holocaust. Through analysis of Hitler’s rhetoric—the words, images and metaphors contained within his writing and speeches—Koenigsberg’s study reveals the “hidden narratives” that were the source of genocide. Hitler’s actions—the history he created—followed as a consequence of his fantasy that by destroying the Jewish “disease” Germany might live forever.

Dr. Koenigsberg’s second book, The Psychoanalysis of Racism, Revolution and Nationalism (1986),examines the idea of the nation as a sacred object saturating our day-to-day reality. Through analysis of the writings of Hitler, Lenin, Sri Aurobindo and others, Koenigsberg articulates core fantasies underlying the ideology of nationalism. What racists and revolutionaries have in common is belief that a particular class of people constitutes a “disease” within the body politic—that must be “removed” if the nation is to survive.

In Symbiosis and Separation: Towards a Psychology of Culture (1989) Dr. Koenigsberg lays the foundation for a psychoanalytic theory of culture and politics by focusing on how objects in the external world symbolize infantile objects and fantasies. Koenigsberg develops a psychoanalytic theory of nationalism. Separation from the mother is experienced as mutilation of one’s body—the loss of self. One binds to one’s country to recover a part of the body experienced as lost.

From 1990-2000 Dr. Koenigsberg lectured extensively at conferences throughout the U.S. on the topics of Nazi ideology, the Holocaust, warfare, and sacrifice. Among the titles of his presentations are: “Nazism as Immunological Fantasy,” “Dream of the Body Politic in Western History,” and “Dying for One’s Country.”

In 1999, Dr. Koenigsberg was invited to speak at the Colloquium on Violence and Religion where he spoke on “The Sacrificial Meaning of the Holocaust.” He was also an invited speaker at the Society for Political Anthropology: “Nazi Ideology and Genocide.”

After September 11, 2001, Dr. Koenigsberg was sought-out for his insight into the psychological sources of warfare and violence, as these topics were once again forced to the forefront of the world’s attention.

In 2002 Dr. Koenigsberg spoke at the Annual Conference of the Colloquium on Violence and Religion—again as an invited speaker—where he presented on “Awakening from the Nightmare of History: War as Sacrifice.”

Dr. Koenigsberg was invited by Taylor & Francis to create a Special Issue of the Journal Peace Review on the Psychological Interpretation of War. Published in 2005, this is the definitive publication on the psychological sources of warfare includes articles by prominent scholars from around the world.

In 2006, Dr. Koenigsberg was sponsored by the International School for Mental Health Practitioners to give a workshop at the Church Center for the United Nations. “Something to Kill and Die For: The Psychology of War and Terrorism.”

Dr. Koenigsberg’s lecturing career culminated in 2008 when he was invited to lecture at the National Psychological Association for Psychoanalysis. His lecture at this event, “Dying and Killing for Love: The Psychoanalytic Interpretation of Warfare,” fully articulated the connection between love and sacrifice.

Dr. Koenigsberg also co-taught a course at the Boston Graduate School of Psychoanalysis on the psychoanalytic interpretation of war which explored the concept of collective forms of psychopathology: disorders that may be inherent within the structures of society.

His fourth book, Nations Have the Right to Kill: Hitler, the Holocaust and War (2009) was praised for its “profound psychological insight,“and “enables us to understand human institutions in utterly new ways.” Focusing on the two World Wars and the Holocaust, this book provides insights into the “hidden narratives” operating under the radar of history.

In early 2012, Dr. Koenigsberg launched Library of Social Science Book Reviews in order to identify the most significant scholarly publications, and to make people aware of them.

Dr. Koenigsberg is also Acquisitions Editor for Library of Social Science, Publishers in the subjects of political theory, political psychology and history.

“Richard Koenigsberg’s ideas on human violence and destructiveness are startling all the more for being self-evident once they have been absorbed. His ideas cut through conventional notions about culture and war, enabling us to understand human institutions in utterly new ways.” —Professor Ruth Stein, New York University, author of For the Love of the Father

Papers by Richard A. Koenigsberg

Lectures and Workshops by Richard A. Koenigsberg