The Psychology of Totalitarianism - Review Essay of Japan’s Holy War

The Psychology of Totalitarianism 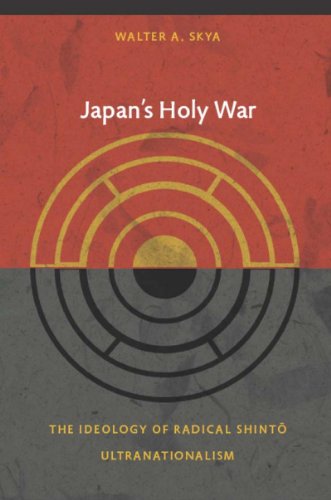 Japan’s Holy War reveals how a radical religious ideology drove the Japanese to imperial expansion and global war. Bringing to light a wealth of new information, Walter A. Skya demonstrates that whatever other motives the Japanese had for waging war in Asia and the Pacific, for many the war was the fulfillment of a religious mandate.

Walter Skya is Assistant Professor of History and Asian Studies at the University of Alaska Fairbanks.

Japan’s Holy War is available directly from Duke University Press, or through Amazon at discounted rates.

Click here for information on how to purchase from Amazon.com

Totalitarianism seeks fusion of self and society, declaring there shall be no such thing as separation. The totalitarian fantasy is that individual and society are one—that human beings are bound inseparably to their nation.

In totalitarianism, the body of the individual is imagined to merge with an actual body politic that can live forever. Human beings embrace totalitarianism—abandon their separate selves—in order to partake of the “immortality” of the body politic. Unlike humans, the nation is conceived as an organism that can “live on.”

What is totalitarianism? Why did the Axis powers stick together? What did Japan have in common with Germany? This essential book articulates the ideology and psychology underlying Japanese ultra-nationalism.

Skya explicates the thinking of Japanese social theorist, Hozumi Yatsuka (1860-1912). According to Hozumi, the individual exists in society—and society within the individual. The clash between individualism and socialism is resolved through the concept of g­odo seizon (literally, fused or amalgamated existence), meaning the merging of the individual into society. Human beings fuse together to create “society.”

The ideal person, Hozumi explained, is one who desires assimilation into the “higher organic totality” of society. The purpose of ethics and morality is to direct the individual toward kodoshin: submergence of the self into the social totality.

For Hozumi and many other Japanese thinkers, Skya says, Enlightenment thought was a threat to the Japanese ethnic state. The struggle against Western liberalism focused on the idea of “the individual” as an entity separate from society. Hozumi stated that “the individual does not exist in isolation. It is a mistake to think that society is made up of isolated, self-supporting individuals.”

Hozumi sought to wage war against Western civilization. This, essentially, was a war against the idea that it is possible for human beings to exist in a condition of separation from society. The bond between the individual and society had to be rock-solid and eternal.

Minobe Tatsukichi (1873-1948) was one of the hundreds of Japanese students who flocked to German universities in the late 19th and early 20th centuries and absorbed German thought. These students were influenced by theories pioneered by G.W.F. Hegel (1770-1831), who asserted that the state was not a contractual relationship between individuals, but was “itself an individuality, independent of and superior to all other individuals.”

Sovereignty, according to Hegel, was not the right or power of the individual or individuals, but stemmed from the state itself, an “organic unity with a personality of its own.” From a Japanese perspective, the state was conceived as a person or “individual organism,” and the emperor as an “organ of the state.”

Hegel’s theory easily transferred to Japanese society. Uesugi Shinkichi (1878-1929), a constitutional law scholar, also conceived of the state as an organism. In Japan, the emperor was the ultimate source of the nation’s organizational will, representing the ideal embodiment of the state organism.

Obeying the emperor was not only a moral action that contributed to this “collective being as a totality,” but also to the highest realization of the self—of one’s “essential being.” To absorb the self into the emperor, Skya says—to become part of the emperor—was to “accomplish man’s essential being.”

An important thinker shaping religious nationalism in Japan was Kakehi Katsuhiko (1872-1961), who developed the theory of “one heart, same body,” which advocated abandoning the self and offering one’s entire body and soul to the emperor. A true Japanese does not think of self-interest, but rather “forgets one’s own concerns and completely offers oneself to the emperor.” This was especially true for soldiers.

When one enlisted in the military, one “died and was reborn again to the armed forces under the command of the emperor.” According to Kakehi, “You give up your life, and do not think for a moment that you are what you are.” One abandoned one’s personal will in order to fulfill the will of the emperor.

To achieve the state of “one heart, same body,” the individual had to discard or annihilate the self. According to Kakehi, any consideration of one’s own personal needs was wrong: one had to totally submerge the self into the collectivity. When Kakehi spoke of the bad aspects of Western culture that had entered Japan, Skya explains, he was referring to the evils of Western secularism and individualism. Kakehi believed that the Western focus on the value of the individual was the “greatest threat to the Japanese nation.”

What is the nature and meaning of this threat of “individualism” that pervaded Japanese political theory? I have found this same idea—that the nation is threatened by individualism—at the heart of Nazi ideology. Why should the idea of individual freedom be conceived as a threat to the existence of one’s nation? Here we encounter a fundamental dynamic revolving around the idea of separation or separateness.

Individualism” for the radical nationalist is equated with the idea of separation from the nation, thus disrupting the idea of “one heart, same body.” Totalitarianism revolves around the nation as an actual organism or body politic. Individualism or separateness, therefore, implies the idea of a human being (a body or organism) that is not merged or fused with the national body. What terrifies is the idea that the human body might become separated from—no longer united with—the body politic.

The totalitarian dream or fantasy, common to both Japanese ultra-nationalism and Nazism, is that all human bodies must unite to constitute one body: the omnipotent body politic. In totalitarianism, each and every human being is expected to abandon the “will to separation” (individualism), and to subordinate the self to the “national will.”

But what becomes of the self after individual consciousness is denied? In Kakehi’s political theology, according to Skya, the individual “enters into the mystical body of the emperor once one’s own individuality is abandoned.”

Skya concludes that the “total assimilation of the individual into a collective body is the goal of all totalitarian movements,” of which Shinto ultra-nationalism was “only one variety.” I agree with this assessment. What’s more, the assimilation of the individual into the collective body is conceived as a moral imperative. The fundamental dictum of totalitarianism is: “There shall be nothing separate from the collective body.” Taking this a step further, one is justified to take measures to kill or destroy those individuals who embrace the heretical view that separation from society is possible.

The idea of separation or separateness acts to shatter the fantasy of perfect union with an omnipotent body (politic). Perfect union is achieved when the individual abandons his will in order to internalize the will of the nation and its leaders. Hitler informed the German people, “You are nothing, your nation is everything.” The advantage of becoming “nothing” is that one can incorporate the nation into the self—thus becoming “everything.”

Soldiers occupy a special role in this totalitarian ideology of fusion. Kakehi singled out the armed forces, which he thought occupied a special position among the emperor’s subjects in the Japanese state. In his "One Spirit, Same Body" address, he quoted a passage from the Gunjin Chokuyu (Imperial Rescript to the Armed Forces):

Soldiers and Sailors, We are your supreme commander-in-chief. Our relations with you will be the most intimate when We rely upon you as Our limbs and you look up to Us as your head. If the majesty and power of Our Empire be impaired, you share with Us the sorrow; if the glory of Our arms shine resplendent, we will share with you the honor.

This passage, Skya observes, emphasizes the “direct and intimate ties between the Emperor and the soldier.”

However, the relationship between leaders and led is more than “direct and intimate.” The soldiers and sailors are relied upon as “limbs,” and should look up to their commanders as their “head.” In short, soldiers are conceived as if part of the same body. When a soldier carries out the will of his superior, he is not simply “obeying.” He can no more resist the order of his superior than an arm can resist the brain’s command.

In his The Waffen SS (1990), Bernd Wegner observed that the SS saw the individual as an “integrated element of a social organism.” The value of the SS-man—justification for his very existence—“depended solely on the advantages he furnished the national community.” The individual was, in the eyes of the SS, only a “fragment of the body politic to which he owed his allegiance.”

As a “fragment of the body politic,” the SS-man had no alternative but to obey the body politic. Like the Japanese soldier in his relationship to the emperor, the SS-man was expected to abandon his subjective will, and to execute the “will of the Reich,” that is, Hitler’s will. Himmler informed his SS that “everyone should be fully aware that our lives do not belong to us, but to the Fuehrer and Reich.”

The body of the SS-man belonged to the Reich because his own body was not separate from the body politic. This is the meaning of “obedience.” The nation was an enormous body politic existing within the body of the SS-man, and thus could not be resisted. Thus, the “organic theory of the state” that political theorists write about—seemingly an obscure, mystical ideology—has very real, practical consequences.

The goal of the ideal self in Japan prior to the Second World War was to “absorb the self into the emperor:” to become “a part of the emperor.” Similarly, the Nazis’ ideal German citizen sought to absorb Germany into himself: to identify with Hitler. “National identification,” for the soldier, meant giving over one’s body to the body politic. When the body politic exists within the self, this larger body overwhelms the smaller body, compelling the smaller body to do the bidding of the larger body.

The aspiration of totalitarian ideology is to destroy the boundaries between self and society; between one’s own body and the body politic. Totalitarian ideologies seek to actualize a symbiotic fantasy of no separation.

Hitler asserted that “the individual is transitory, the People is permanent.” When he spoke of “the People,” Hitler was referring to an abstract idea or ideal—his “national organism”—not to concrete human beings. The German nation was conceived as an actual body that could live forever.

Japanese and German totalitarianism grew out of a mystical theory: the idea of nations or bodies politic as real entities that have the capacity to live forever. Nations are conceived as omnipotent bodies that embrace and contain everything. Political violence seeks to assert the reality of these mystical entities: to kill off those human beings who do not acknowledge or agree that this entity is omnipotent.